The gender pay gap represents the divergent experiences women and men have not only in employment but also in education, training, care and other unpaid domestic labour. As the key indicator of women’s labour market inequality, data relating to the gender pay gap is critical to Close the Gap’s work.

The UK Office for National Statistics (ONS) produces data on the average hourly earnings of women and men in the Annual Survey of Hours and Earnings (ASHE). Each year, Close the Gap analyses this data in order to assess how the gender pay gap has changed over time.

The latest data shows that there has been a marginal narrowing of Scotland’s gender pay gap of 0.3 percentage points from 2020 to 2021. This means that the gender pay gap remains a persistent feature of the Scottish labour market and currently sits at 10.1%. 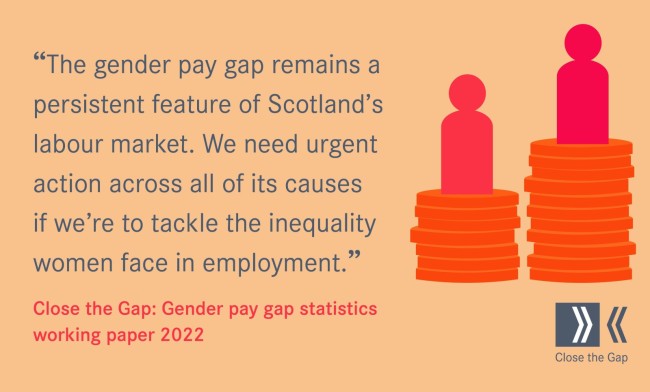 By contrast, data from 2020 showed that the gender pay gap had declined by almost 3 percentage points from the previous year. However, as we outlined last year, this should be treated with caution. 2020 data came with reliability warnings around the collection of data during public health restrictions, and the impact of the pandemic on the gender pay gap was unclear.

As the more substantial decline in the gender pay gap has not been replicated within the latest data, it is likely that changes to the gender pay gap in 2020 reflected Covid-19 job disruption, rather than underlying pay trends. The pandemic brought significant changes to working hours and 8.8 million employees across the UK were furloughed under the Coronavirus Job Retention Scheme when the 2020 data was collected.

ASHE data also enables us to analyse the gender pay gap by occupation, industry, working patterns and age groups. Close the Gap analysis of this data forms the basis of our annual gender pay gap statistics paper. The key findings from our latest paper include:

These findings highlight that we are still very far from meaningful progress on the inter-related barriers women face in entering and progressing in employment. This is despite increasing focus on the gender pay gap, including the publication of Scotland’s first gender pay gap action plan in 2019. Issues remain around employer complacency and a continued lack of gender mainstreaming in labour market policymaking.

Data pertaining to the gender pay gap delivers vital insight into women’s continued inequality in employment, providing a greater understanding of the undervaluation of women’s work; occupational segregation; and women’s low pay. However, there remains a lack of gender-sensitive, sex-disaggregated data on the labour market and intersectional data remains almost non-existent. For example, there are critical data gaps on pay and earnings for Black and minority ethnic women and disabled women. Addressing these data gaps are critical to realising gender equality in the labour market.

At current rate of progress, it will take a very long time to close the gender pay gap. Moreover, lower gender pay gap figures can mask the inequalities that women continue to experience in the labour market. This is not, therefore, a time for complacency in tackling the causes of women’s inequality at work.