It is now more than 50 years since the Equal Pay Act came into force, but there is still a massive inequality between men’s and women’s pay.

These headline figures represent a lifetime of inequality for women which contributes to women's higher levels of poverty, children's poverty and women’s pensioner poverty. It also impacts on household earnings, and on men’s earnings when they work in sectors or occupations with high levels of female workers.

There are three main causes of the gender pay gap.

Stereotyping about women’s capabilities and skills results in women being clustered into predominantly female occupations that are associated with low pay. These include cleaning, catering, admin, care, and retail. There are also barriers, sometimes called ‘the glass ceiling’, which make women less likely to be found in management and senior positions.

Women also experience discrimination and disadvantage because they are more likely to have caring responsibilities for children, sick relatives, disabled people, or older people. One fifth of women lost their job, or lose out on pay or promotion, simply for being pregnant.

Discrimination in pay and grading systems

There is also widespread discrimination in pay systems, with many women being paid less for work that is the same or similar, or of the same value as male colleagues’ work. This is usually not intentional and there can be many factors within pay systems that lead to inequalities. For example, individuals being appointed to different points on the pay scale; different job and grade titles for virtually the same jobs; male jobs having disproportionate access to bonus earnings; women having less access to high-paid shift and overtime work; performance-related pay being unfairly awarded; women not receiving the same access to training; sex bias in analytical job evaluation schemes grading women’s jobs lower.

The pay gap is bad for business, and bad for Scotland’s economy because many women are working below their skill level. Companies that treat staff fairly are more productive, more innovative, find it easier to retain skilled staff, and ensure that they have a positive corporate image 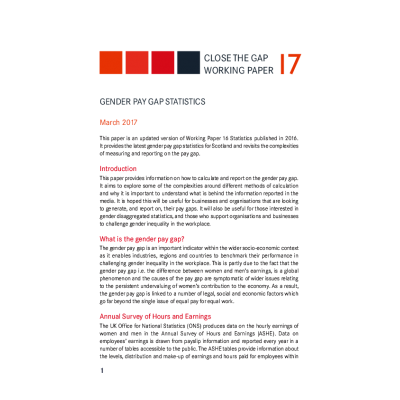 Flexible Working for All? The impact of the right to request regulations in Scotland Enabling flexible working is a critical component in closing Scotland’s gender pay gap. 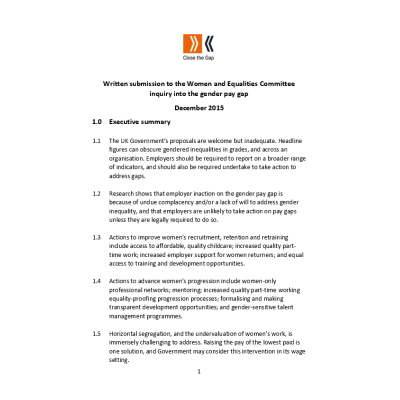