Close the Gap has published a new working paper on gender pay gap statistics with a specific analysis of Scotland’s pay gap.

The paper uses data from the Annual Survey of Hours and Earnings(ASHE) tables, from the UK Office for National Statistics, to analyse pay differentials between women and men working in Scotland.

As detailed in table 1 below, the overall mean gender pay gap has seen no difference which remains stubbornly high at 14.9% in 2016, compared with 14.8% in 2015. This means that on average women continue to earn 85p for every £1 men earn.

Very little progress has been seen on the part-time pay gap with a very modest decrease of 1.3 percentage points to 32.2%, when comparing women’s part-time average earnings to men’s full-time earnings, illustrating the fact that part-time work is concentrated in low-paid, undervalued, stereotypical female jobs and sectors such as cleaning and care. 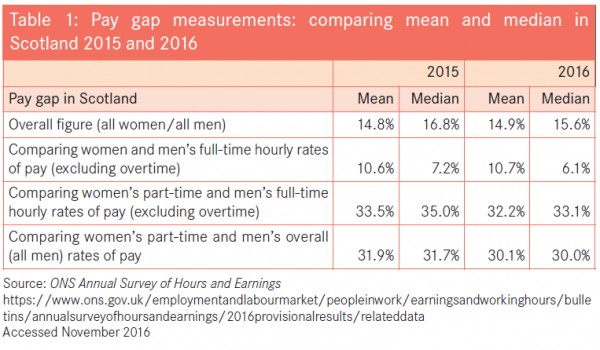 This very small decrease is partly due to the introduction by the UK Government of the National Living Wage which contributed to an increase of the average earnings of the lowest paid groups of workers to £7.22 for the average full-time female worker, and £7.20 for average part-time female worker. Women are still far more likely to be concentrated in low-paid, part-time work therefore likely to benefit most from the introduction of a new minimum wage bracket. 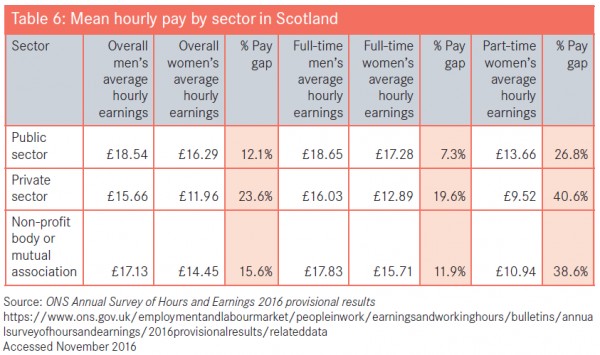 As table 6 from the report (and above) shows, the public sector overall (12.1%), full-time (7.3%) and part-time (26.8%) pay gaps are lower than the national averages, 15%, 11%, and 32%respectively, whilst the private sector pay gap is considerably higher for each group (23.6% for overall, 19.6% for full-time, and a staggering 40.6% part-time pay gap. The public sector pay gap also decreased very slightly by 0.9 percentage points which may have contributed to the overall reduction in the part-time pay gap, as women are more likely to work in the public sector, very often in part-time jobs.

For the first time the new ASHE release has allowed for pay gaps in the third sector to be calculated. The figures for the full-time (11.9%) and overall pay gap (15.6%) were close to the national averages however the part-time pay gap was considerably higher at 38.6% suggesting that there is a lack of quality part-time jobs in the third sector as there is across the rest of the labour market.

The working paper also provides information on the average difference in earnings in across different age groups, occupational groups, and an analysis of the Scottish gender pay gap over time.

The most recent data highlights the stubborn nature of the gender pay gap. The figures are useful as an indicator of the persistent and entrenched inequalities within the labour market, but with negligible change in recent years, it’s a clear signal that current Scottish policy responses to the pay gap are inadequate. Across Scotland, women and men are still segregated into different types of jobs, and a lack of quality part-time and flexible work sees women under-represented in higher-paid senior roles. Time will tell whether the new pay gap regulations will influence large employers to not only report their pay gaps, but to develop actions to address the barriers that women face. What is clear though is that Scotland needs a coherent strategy to tackle the complex and inter-related causes of women’s inequality at work if the pay gap is to be closed.

The full report can be accessed here.