The second Tuesday in October – today – is Ada Lovelace Day, an international celebration of women in science, technology, engineering and maths. Augusta Ada King, Countess of Lovelace, to give Ada her full title, was born in 1815 and is considered to be the first computer programmer. A gifted mathematician, she received instruction from an early age from a series of noted scholars, including Mary Somerville, a Scottish astronomer and mathematician who was one of the first women to be admitted into the Royal Astronomical Society.

Ada Lovelace day aims to highlight the contributions of women across the STEM fields, and encourage and inspire girls and women to pursue study and careers in science and technology. This is important for a number of reasons. The majority of women with qualifications in STEM subjects do not work in STEM areas; 73% of female graduates do not go on to have a career in STEM. This is a huge waste of women’s skills, talent and contribution, which is bad for women, and bad for Scotland’s economy. STEM occupations see some of the most significant patterns of occupational segregation, and it is no accident that this corresponds to some of the highest skills shortages. Work to enable women to participate fully in STEM study and careers has the potential to plug this gap and stimulate innovation, productivity and economic growth.

But how do we encourage women to work in STEM? Gender stereotyping works covertly and overtly from a young age to set out that science is for boys, not for girls. The tech sector in particular has long been a hostile environment for women, with many women working there experiencing sexism on a regular basis. We have also seen recent media coverage of the scale of sexual harassment and gender violence by UK university staff; with the combination of this and the effects of gender stereotyping throughout the education and skills pipeline, is it any wonder the number of female professors, particularly in STEM subjects, remains so low? Attitudes which allow women to be treated like this contribute to an environment which also allows women to be paid less and passed over for promotion, and the constraints on women’s lives which prevent them from equal participation in the labour market apply in STEM occupations just as much as in others.

And yet, change is possible. The Scottish Government’s Developing the Young Workforce strategy makes specific commitments to address gender segregation in education, with a focus on STEM subjects, and its ‘Returners’ project aims to support women to update their skills and knowledge after taking career break, so they are more able to return to work at the same level, encouraging employers to support and retain these skilled employees. Our own Be What You Want project works in schools to tackle gender stereotyping through building capacity among teachers and young people to identify and challenge it. And, celebrating their ten year anniversary this year, Equate Scotland works to promote, develop and support women in STEM. Their work includes providing career development sessions, delivering training on assertiveness, returning to work and developing employment skills and creating networking opportunities with STEM employers.

Work to address gender stereotyping which sees girls and young women funnelled away from STEM subjects must be combined with work to address sexist attitudes and environments in further and higher education, and in workplaces, which prevent women from making the most of their skills and talents, and staying in these subject areas. Alongside this work must also continue to address women’s wider labour market inequality, including expansion of accessible and affordable childcare, and increasing access to flexible work, particularly in senior and specialist roles – a key problem in the STEM sectors. 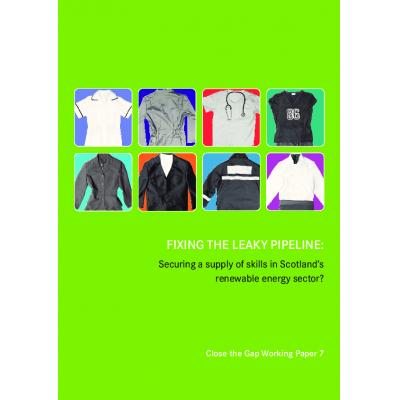 Fixing the Leaky Pipeline A position paper on how reducing occupational segregation in the Scottish renewable energy sector can address skills shortages.