What is the Gender Recognition Act?

The Gender Recognition Act 2004 (GRA) is the law that governs how trans people can get their gender identity legally recognised – and so have the correct gender marked on their birth certificate. The GRA is currently UK-wide legislation, but birth certificates are a devolved matter that the Scottish Parliament can legislate for.

In November 2017, the Scottish Government launched a review of the Gender Recognition Act which includes proposals such as:

The UK Government is also conducting a review of the Gender Recognition Act through a separate process.

How will the Scottish Government consultation work?

You can find out more information, including an FAQ about the consultation process here.

We support the Equal Recognition campaign and broadly welcome the reform of the Gender Recognition Act. The complexity, restrictions and expense of the current gender recognition process particularly discriminates against trans people who are disabled, migrant, minority ethnic, unemployed, homeless, experiencing domestic abuse, young or non-binary. Enabling trans people to smoothly change their birth certificates at the same time as they change their other identity documents is a positive step forward.

We will be responding to the detailed proposals in the consultation document, and making suggestions for implementation that avoid unintended consequences for women’s equality and rights.

How did you come to your position?

Our organisations have a long history of deliberation on the interrelationship between trans equality and rights and women’s equality and rights. Many of our organisations were involved in the ‘T in Feminist’ campaign, have worked on action research projects to identify barriers to service delivery for trans women, and have developed trans-inclusive violence against women services and specific support services targeted at LGBTI people.

Our position is based on internal dialogue within our organisations and their memberships about issues around sex and gender and women’s equality, our long experience of engaging with equality law and policy, and in service delivery at national and local level. It is also based on our many years of collaboration and discussion with Scottish Trans Alliance, and other LGBTI national organisations.

What difference will the proposed change to gender recognition make to women-only spaces and services delivered by your organisations?

None. We are not aware that any women’s organisation or group currently in our networks requires sight of a birth certificate in order to grant access to services or membership. All access to membership and services is based on self-identification. This will continue.

All violence against women organisations that receive Scottish Government funding provide trans-inclusive services. The requirement for trans inclusion plans has been in place for six years, and has not given rise to any concerns or challenges of which we are currently aware. Rather, trans women have added to our movements through their support, through volunteering, and as staff members of our organisations. In order to provide a definitive statement on this in our consultation response(s), national umbrella violence against
women organisations will be systematically gathering data on how well these plans are working at the frontline.

The social media discussion on the proposed changes to the Gender Recognition Act has included concerns that victim-survivors of sexual violence and domestic abuse may be placed at risk. Rape crisis and women’s aid services prioritise women’s safety, confidentiality, privacy, dignity, and wellbeing above all else. Over decades of practice, services have developed ways of managing any risk to individual women’s wellbeing that may arise from interacting with other service users.

All of our organisations have processes in place to respond to the small numbers of perpetrators and so-called men’s rights activists who attempt to disrupt services or women-only space, or harass or hurt service users or women participating in our events.

This discussion has thrown up some misconceptions about what it is like to access violence against women support and advocacy services, and our organisations will be thinking about ways we can share more information about how rape crisis and women’s aid does its work.

We will also look in detail at any proposals that impose legal requirements on violence against women services to change our practice. The proposals within the consultation do not make any such imposition, but we will be discussing this with Scottish Government and with regulators in Scotland.

Do you have any concerns around the proposals?

We have two key concerns at the moment, and we are interested to hear from people who have identified any others.

Evidence from The British Psychological Society to the Women and Equalities Committee of the UK Parliament has flagged its concern at the small number of men convicted of sexual offences who (in their words) “falsely claim to be transgender females” in order to secure parole, explain their offending, or get increased access to women and children once they have been released from prison. They express concern that the GRA proposals will in some way enable this small group of perpetrators if mitigating action is not taken by criminal justice agencies.

Some of our organisations will be picking up the issue of women’s safety with Scottish Trans Alliance and the Scottish Prison Service and other relevant agencies, to explore plans for ensuring women’s safety in prison and in the community.

Some public bodies we have been talking to about data collection have suggested that the existence of non-binary people means that it is either ‘offensive’ or otherwise ‘not appropriate’ to gather data on the sex of service users, employees, or other relevant groups.

This is not correct, and we will work with Scottish Trans Alliance and other LGBTI organisations to share clear information around gathering and using gender-disaggregated data. Public bodies in Scotland are currently required to do this as part of their obligations under the public sector equality duty. Gender-disaggregated data is essential to designing policy and services that meet the distinct needs of women and girls.

How will you resolve any unforeseen problems?

We have engaged with Scottish Trans Alliance since its inception, and have a strong, trusting working relationship. We are proud of our history of working together, and have confidence that we can be frank about any difficulties we have about the unintended consequence of changes to law and policy.
We are allies in the fight against men’s violence against women, and against gender stereotyping and essentialism.

Our women’s organisations and Scottish Trans Alliance are all committed to enabling dialogue and creating space for difficult conversations to take place. We know that regression on human rights and equality is happening even as we see progress in other areas. We are still near the beginning of theorising sex, gender, gender identity and how they interrelate. That those conversations are ongoing and unresolved does not affect our ambitions for trans equality and rights, or for providing services that meet the needs of trans women who have experienced sex discrimination or men’s violence.

Should your organisations have carried out an equality impact assessment on the consultation?

Equality impact assessment is a policymaking tool that public bodies in Scotland are legally required to use when they develop, review, or change policy. Scottish Government has published information about what it calls a “partial” EQIA in its consultation document. The information provided does not meet the requirements of an EQIA, in our view.

Although our organisations use a form of EQIA when we develop some services, as a process it is not relevant to policy advocacy work like consultation responses. This is because we are not iteratively developing an intervention or policy measure ourselves, but responding to the work of policymakers that sets out a menu of options.

Our organisations will, of course, comment on the impact on women and women’s equality when we respond to the proposals in the consultation.

How can I engage with the consultation as an individual?

Individuals can complete a response to the consultation here where you can also access other Scottish Government documents relating to the Gender Recognition Act.

The website http://equalrecognition.scot/ also has lots of useful information about specific issues around the Gender Recognition Act and a guide to filling out the consultation. 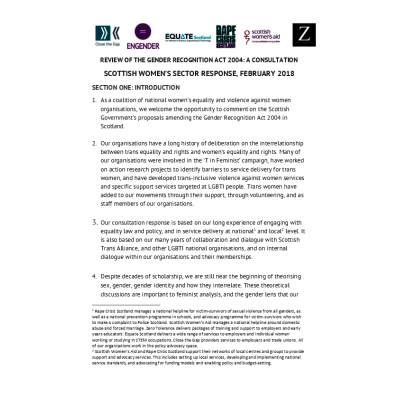