Findings from the evaluation of the Equally Safe at Work pilot

Yesterday Close the Gap held an online event to celebrate the success of the Equally Safe at Work pilot and launch the evaluation report for the pilot.

Equally Safe at Work is an innovative employer accreditation programme that was developed to support the local implementation of Scotland’s Equally Safe Strategy. The programme was designed to support councils to understand how gender inequality and violence against women (VAW) affect women in the workforce and the wider organisation, and to provide a framework to drive change.

To receive bronze accreditation councils had to demonstrate they had met criteria across six standards which align with women’s workplace equality:

What the evaluation told us

Over the pilot period, we collected qualitative and quantitative data to measure whether the programme was effective at improving employment policies and practice and, also in improving understanding about gender inequality and VAW in the workplace. We also wanted to pilot whether an employer accreditation programme was an effective model for engaging with councils.

The evaluation found that councils had developed improved employment policies and practices. As a result of engaging with Equally Safe at Work councils:

Four councils received bronze accreditation and completed the pilot. To demonstrate they had completed the pilot, councils submitted a range of evidence to be assessed by Close the Gap for the bronze tier. Councils found criteria in the sections on data, occupational segregation and workplace culture most difficult to complete. As well, some of the evidence that was submitted was not adequately gender-sensitive which suggests that there is further work required to build gender competence in councils to better understand the importance of gender and VAW-sensitive employment practice. 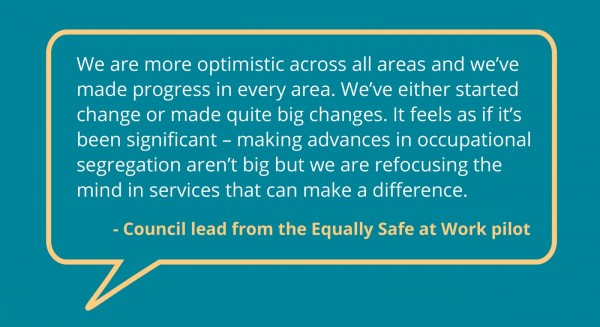 Equally Safe at Work as a driver of change

The Equally Safe at Work pilot has been effective in engaging with councils on VAW and gender equality and has enabled positive changes to employment practice which contribute to the advancement of women’s equality. The programme has built capacity in councils to better understand, respond to, and prevent VAW. It has also enabled councils to progress work on gender equality by developing improved employment policy and practice; gathering data that are critical to gender equality at work; and developing initiatives to address occupational segregation.

A key success factor of Equally Safe at Work is the prescriptiveness of the programme. Councils were provided with clear and specific guidance for improving employment practice across six standards, including best practice examples. Through this approach, councils were able to make changes to employment practice, build capacity in line managers and others, and challenge harmful stereotypical attitudes and behaviours. Learning from the pilot also highlighted that for councils to be successful in the programme, it is critical that there is commitment from senior leaders, adequate resources to deliver the work, and crucially, an understanding of, and a commitment to, ending VAW and advancing gender equality at work.

You can read the full report here.